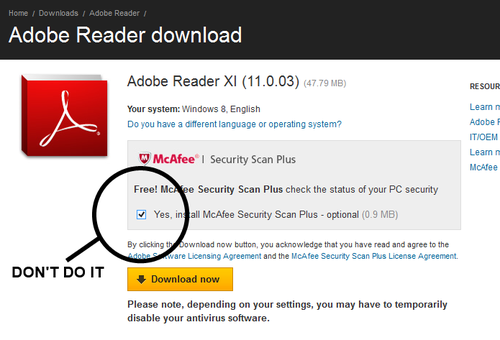 For the past few weeks I have seen friends and family that turn to me for advice on their Windows PC’s that have installed McAfee Security Scan Plus.

I have been wondering where it was coming from, since it appeared to be everywhere. I was not quite sure it was a legitimate program…

but I could easily remove it from windows using the add and remove programs dialog.

And today, after a week or so I stumbled upon it. It is an ‘optional install’ when you download Adobe Reader. Which is odd, why would you want to install a security product when downloading a document viewer?

What makes it even more obscure is the remark below the ‘Download now‘ button which states that ‘you may have to temporarily disable your antivirus software‘.

At least I know now where it’s coming from and that it can be installed without a problem. But my advice would be:

DO NOT INSTALL McAfee Security Scan Plus when you install Adobe Reader.

To make it dead easy here is a picture stating what you should not do.